So let’s be honest. I thought I would have written this weeks ago. But, alas, these past 6 weeks seem like a fog in this ever shrinking galaxy that I like to call my mind.

I’d like to say that I am in some cute trendy, organic leggings, a turquoise fitted sweater, with big, dangling earrings and my hair braided into that cool, wispy hairdo that looks all majestic and princess like.

But instead, I am in these maternity pants that are torn in 3 places, stained with the curry I ate yesterday(?).  Nothing fits quite right because my body is just not quite right. My hair is anything but majestic and I am flushed and sweating. Why sweating?  Well it is surely not due to the heat that I often moan and groan about here. No, because it is probably only 70 degrees outside, with a cool breeze floating up the mountain (because we basically live in the clouds here in the Himalayas). No, I am sweating because, well I just do not know. I guess that is hormones for you?

With a past as a labor and delivery nurse, I laugh at thinking what I used to say to women in labor. Goodness, pushing out the babe is a piece of cake compared to the first month afterwards. And that fully swollen pregnant body is GLAWrious compared to the saggy, loose, confusing body suit you find yourself in afterwards. And the ache of walking around for a few weeks afterwards?
Yes. It is normal and it hurts.
I would rather push out another baby than endure that constant ache threatening to debilitate me completely. And the stuff we sit in to make the ache ok and to redue the swelling? Sitz baths, we call it.

Well, the stuff they use here dyed the bottom half of my body purple after sitting in it 3x/day for 15 minutes.

It did the job of helping the pain and reducing the swelling… but it did leave half of my body like that of Violet Beauregarde .


I remember the time I was maybe into my L&D job (in Tallahassee, Florida) only 3 months when this sweet mama comes into the hospital in full on labor. I think she delivered an hour after I admitted her. It was my first delivery without my preceptor nurse alongside me. And there I was, a 21 yr old nurse, asking her as I had my trembling hand on the computer mouse “what is your pain right now on a scale from (insert groaning pain from my patient in the background) 1 to 10?”. She looked at me with a glare that could have frozen that hot, sticky Tallahassee summer day into Arendelle . I have to admit, I think I asked a second time before I got the picture. Pain could not be rated and I best get my trembling hands off of that computer mouse and get the delivery kit set up and call the doctor. Poor mama…I understand now. I really do;)

So let me get to the point.

Rohan Jude is here and he is just scrumptious. He is 6 weeks old and he weighs now what Elliot weighed at 4 months old. My dad called it after a skype call when Rohan was just 1 week old. “He’s gonna be a big boy, Jess” he said. I do believe he was right. He latched on to nurse AS SOON as he was born and doesn’t seem to have detached yet (I kid. I kid. But really, he is a ferocious eater).

Labor was much different than Elliot’s was.

If you remember, we went on a (necessary) motorbike ride when I was 39 weeks pregnant with Elliot. We had to get cabinets for our new house and waiting just was not an option. Alas, the motorbike ride along that unpaved village road induced labor like nobody’s business. I started feeling contractions at 3 am, went to the hospital at 10am, and pushed him out 30 minutes later.

Needless to say, I was pretty hopeful for a similar labor with Rohan. However, he had other plans;) Motorcycle rides and spicy foods would not budge this little one. I was feeling pretty uncomfortable for the last 2 weeks as his head was engaged and pretty low for a while. But I went in for a check up the day after his due date and Dr Roopa (Amazing OB, by the way) heard some decelerations in Rohan’s heart rate.

I was only 1 cm dilated and though I was feeling some cramping, it was not indicating oncoming labor. Dr. Roopa monitored for a good 20 minutes and saw another decel that we just did not feel good about. She brought up the word “induce” and I flinched.

I did NOT want to be induced.

Elliot came on his own and I was pretty adamant that Rohan should to. But I also knew that the 3 decels that we saw/heard were not good and were not reassuring for him to get the oxygen he needed if we waited much longer.

So Raja and I agreed with Dr. Roopa and decided induction would be best.

Meanwhile, our AMAZING friend Lindy was at home with our older boys while I went for a “checkup”.  She called after we were gone for 4 hours and we updated her. So, she, being the amazing/servant hearted woman that she is, welcomed the oncoming job of watching both boys thru the night (and following week).

So they got my IV started and the Pitocin started to flow into my arm sending that cool, intravenous, fluid reminder that a new life was en route.

I cried and called my mom. I cried because I was frustrated that my plans were not working out.  She was on her way to go hiking with my brother, who is about to move to Germany, in a state park in Florida. She felt the distance and I could hear the ache in her voice. Oh sweet mama…what a brave and beautiful woman she is, managing 5 children in 5 different parts of the globe. Truly, her children rise and call her blessed;)

Anyways…I told her my frustration with having to be induced, how I was so frustrated and felt like a failure.  She (graciously and gently) put me in my place immediately. She told me that no labor is going to be the same and to swallow my pride and stop the bellyaching (of course, she used much more tender words than that). I felt empowered by my reality check from a woman who has birthed 5 babies…each with a very different labor story.

(*sidenote: needing induction by NO MEANS is a sign of failure. Me and my crazy perfectionist self wanted it to be a certain way and it wasn’t. Root of my tears: PRIDE. I am so thankful for the medical advances like Antenatal care, Pitocin, Epidurals, C sections, and so much more.  Many times, these medical advances are helping women, the whole world over, to have safer delivery practices and for that…I cannot be more grateful.)

Raja returned to the house where Lindy and our boys were to get things settled for the night (bathe Adam, change ostomy bag, etc etc).

I ordered food. And by food…I mean a chickpea salad, hummus and pita bread, cookies, and a lemon bar. I ordered them from my favorite little cafe that employs vulnerable woman here in Musoorie. Two of my favorite ladies there walked the food over and came to wish me luck.

Then I devoured the food…and by God’s mercy…nausea somehow was not an issue and I kept it all down. But I still don’t know why on earth I ate so much. Nerves? Hormones? whatev. It helped;)

I then put the pedal to the metal.
I decided that I could lie in bed and rest and sleep as I was emotional and tired.
Or I could get out of bed, walk, and use that glorious thing called a labor ball.

I decided to get out of bed. I sat on that labor ball and even did squats around the room, getting back in the bed every time the nurse came in to monitor the baby.

I started to feel the contractions more but nothing too intense yet.

Raja got back about 2 hours later and he said he could tell I was going to have the baby soon. He saw a change in my demeanor and could see a new focus in my eyes. That pumped me up even more. I started doing more squats and sat on the ball with each contraction.

I was getting inspired and I was going to have this baby. I was ready to embrace induction and whatever else was needed to have my healthy babe.

The doctor came again about 10 pm. I was hoping to be ATLEAST halfway to 10 cm by then. But she checked and I was just 3-4 cm. So all that time, all that Pit, and still only 2 cm more?
Man. That was frustrating.

She also decided she needed to break my water. The head was low, I was having regular contractions, and she wanted to have the baby sooner rather than later with the decels we had seen earlier. Made sense, medically, but still took a few minutes for me to accept. (With Elliot, they broke the water when I was already 9 cm dilated. He delivered 15 minutes later…it was crazy fast).

It was a good thing she broke it because I had very little water left (and therefore not much to cushion little Rohan’s body) and that could have been what was causing the decels.

The contractions picked up in intensity really fast. I was now deep breathing and near tears with each contraction. I was on that labor ball, leaning against Raja, listening to him read any Scripture He could think of over me. And it was actually BEAUTIFUL. We didnt have that time with Elliot’s birth and I was thankful for that time with Raja.

About an hour and a half later, I started feeling intense pressure.

I hollered (yes, hollered) for the nurses. They came in and I was 9 cm.

Dr Roopa arrived a few minutes later, I was at 10 cm, and we started the pushing. I pushed for a few more minutes than I did with Elliot and truly felt like it was MUCH harder this time. However, I think I kicked the OB last time while I was hollering “dont touch me!” and this time, the OB was spared from kicks and hollering. Bless them both;)

I was near giving up towards the end but gave it all that I had and out he came. 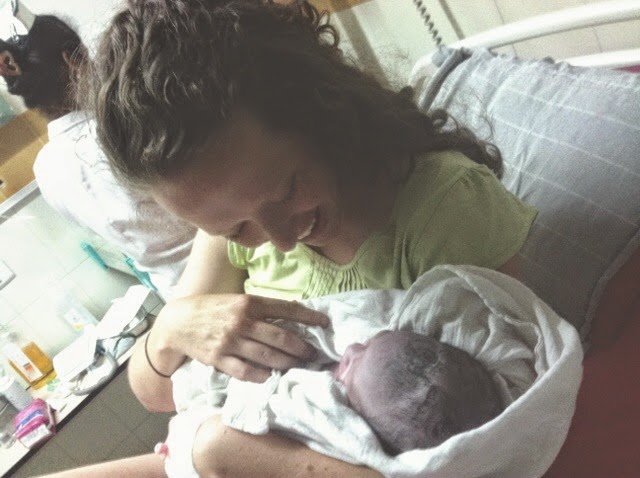 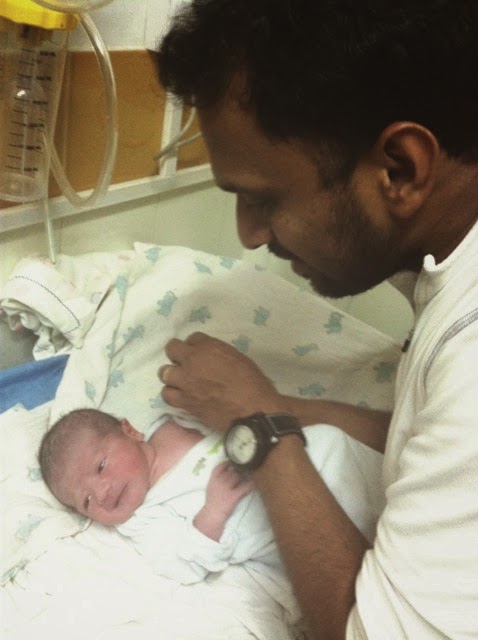 7lbs 3 oz of Heaven’s glory was birthed thru my pains and aches. And boy am I thankful. 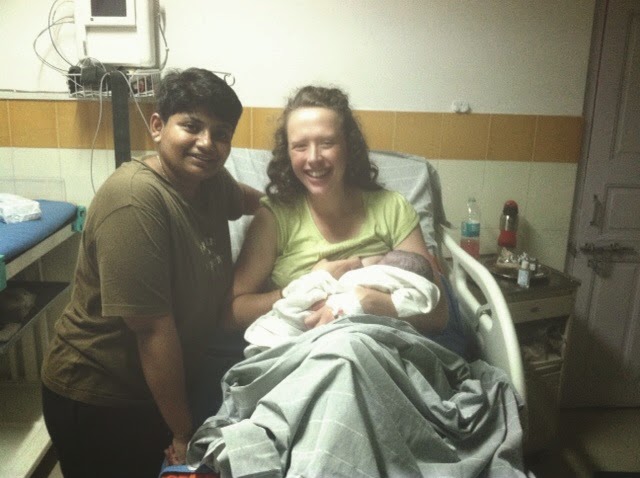 Rohan Jude, you are spectacular and I adore you. I wrote this about you a day after you were born:

And just about 24 hours ago, Heaven met earth and the Creator God fused strength and force and endurance into this mama… And He breathed life into these little babe’s lungs. And a little boy, beating with eternity, entered this world and joined our family on this pilgrimage;)

I love you son of mine.